We tested the Volkl Untrac during a tour in around Riksgränsen in the north of Sweden and inbound on the slopes of Riksgränsen ski resort. Temperatures varied between -10 and -5. On the ascent we encountered deeper soft snow, nearer the top and large part of the descent snow was tightly packed, frozen over (brüchharsh in many places) and windswept. Almost no powder. Inbound slopes were fairly groomed, not icy, regular conditions.

What is very relevant to mention that it was my first time splitboarding. An experience I hope to repeat quite often in the future; because how amazing it was. I loved it! 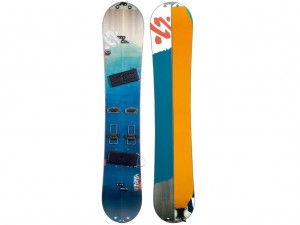 The first thing that struck me was that the Volkl Untrac is quite heavy, certainly compared with regular snowboards. Excluding the bindings the board weighs in at just under 3,5 kilo. But it is a splitboard and the extra weight is obviously added by the base plates for the bindings and the other splitboarding specific parts.

I used the Untrac in combination with my regular Flow 5 bindings and with Gecko skins, not the Vacuum Base Skins that normally are standard with the Untrac. Normally you use the Völkl specific Skin Pin System that is supposed to be very easy in getting the skins fixed to the board. So we can’t judge the merit of these. There are number of other reviews out there however that are all very positive about the skin system.

Even with these non standard skins and bindings the mounting of the Untrac is very easy. It’s an easy transition between the snowboard set-up to the hiking set-up and back again. I completed the transition on the summit in fierce cold hardblowing wind in 5 minutes time.

Hiking up the hill went quite well. What is typical about splitboarding when the snow is slightly deeper, is that the boards really bend through in the middle. The Untrac boasts quite a stiff flex in the length of the board, and the camber between the bindings also helps to lessen this effect. It helped keeping the grip over the total length of the board. Climbing went really well with the board, only the Split Kit with dual height climbing heels where a bit stiff and I didn’t really manage to flip them into position easily with my trekking poles.

Despite my lack of experience in splitboarding the Untrac felt very natural and climbing with it came very easy. 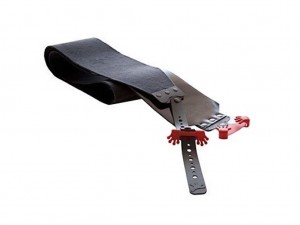 The Gecko skins attached quite easily, the funky little gecko feet taking hold of the corner of the board quite easily. Unfortunately the skins I used were cut a bit too long and I had to gaffer tape them to the back of the board. After a while I lost the tape, and had the skins dangling a bit from the back, but the rest of the skin held really well and worked really wel uphill. In place were touring partners slipped away, the Untrac / Gecko combination gripped really well.

Attaching and detaching the skins was really easy. The Gecko skins have glueless adhesive technology. The effect is that the skins really attach very well, even when the board was wet. Dropping them in the snow is not a problem, and if the skins stick together they peal of just as easily. The skins are light and pack away really easily. 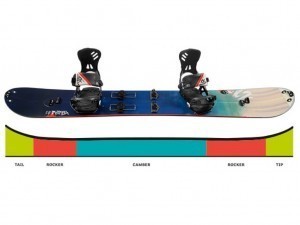 It’s not the most responsive board I have ever ridden. It lacked a bit of power and character. I enjoy a powerful, grippy board, with enough pop to really shoot you through corners, and I missed that in the Untrac. Cornering was not the sharpest I have every experienced. You really had to pile on the power. The stiffness of the board has a lot to do with that, making it better suited for the more heavy, strong rider.

Having said that, the snow conditions weren’t exactly perfect, and I think I would have enjoyed the board much more in deeper snow, where the floatiness you would expect from the rocker towards the tip and tail of the board would come into effect. The board did have enough grip on the icier bits, so that was good. All in all the ride was comfortable, controlled but not very exciting.

Mark Stokmans
Since I can remember I have been very active in many different sports: started with baseball, tennis and riding later hockey, football, running and aikido. In addition, since twelve years old I've been into actionports: at first windsurfing, later climbing, inline skating, snowboarding, mountain biking. With the first action cams coming onto the market I've been making action sports videos. Furthermore, I've worked in the sports industry since 1990, sports marketing, media and live TV and until the end of 2016 at the Dutch Olympic Committee. Besides being partner in GearLimits I work as a digital freelancer. Based in the Netherlands, Married with Children (11 and 13 years old)