When the GoPro Session came out as a part of the Hero 4 line, it was a huge break from the design GoPro had been putting out over the past years, and still now it is a strange little cousin of the larger “regular” GoPro camera’s. Since coming out, GoPro has dropped the price of the camera from initially around € 400,- euro’s to around the € 220,- you can get it for today. So what do you get for your money?

We tested the GoPro Session during one week in the Austrian Alps snowboarding and mountainbiking trails in forests in the Netherlands. 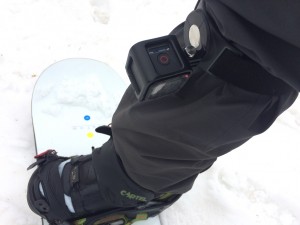 What I think Action Cams are all about is getting shots you would normally not get. And being able to mount your cam anywhere and not be bothered by it, is key to that. And that is what the Hero 4 does. It is so small, ad so light, and it mounts so easily to your head, leg, hand, board anything, that you can get those really cool shots.

The GoPro really stands out in this aspect: mounting it just about anywhere, and keeping a really low profile at the same time. I especially appreciated this when mounting it on my helmet. It is so light you can hardly feel it is mounted.

The GoPro Session does not have case, unlike its bigger brothers but is still shock and waterproof (up to 10 meters). Its coated with a sturdy rubber like skin which feels really good. 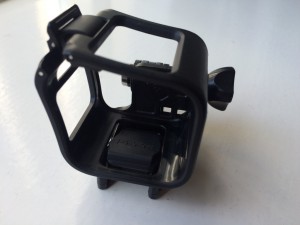 It fit’s into a strong and flexible frame which hugs the camera tightly. You can rotate the camera within the frame if need be. We had two of these frames, the standard mount with which you can mount the GoPro to all mounting accesories on the market, and one with a fixed low profile mount to it. With this frame you can only slide it into adhesive mounts. This mount is really good when you want you really want your mount to be very compact, or really sturdy. I used it when mounting the camera to my helmet (side mount) and tip of my snowboard. The mounting is really stiffened up and the resulting shot from the snowboard is very steady with hardly any vibration. Very cool.

One button to serve them all 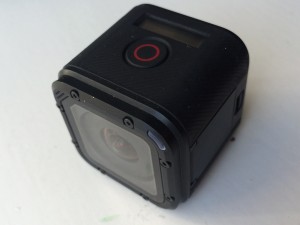 What I really like about the camera is that it has one, top mounted button. It turns the camera off and starts recording. The really smart thing is that as soon as you stop the recording, it powers the camera off. Sounds simple, but I cannot count the times that I inadvertantly left my Hero 3+ turned on after stopping my recording. Say goodbye to your battery life. So simple is much better in this case, and I do believe a good action cam only needs one button. You can feel where it is and you can feel the click as you turn the camera on and off. Without looking, even through thick snowgloves. Really essential as far as I am concerned. 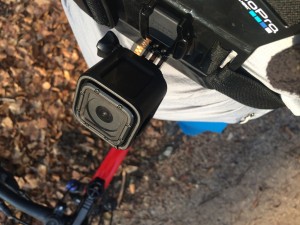 A really cool feature, matching the ease with which you can change the position and the orientation of the camera, is that the GoPro Session detects its mounting orientation and automatically rotates the video.

The video specs arent spectacular, but I have no doubt GoPro will up these in the future. As it is now the best setting is 1080p at 60fps. So now radical superslomo’s to be made, but just really good and crisp quality with balanced and warm colours. Exactly what we would expect from GoPro. And for the price it sells for now, the specs are spot on.

Its low light performance is ok, not exceptional, but as good as the other GoPro’s in the line-up.

I was also very pleasantly surprised by the audio, its just really good. Very natural and there is almost no wind noise in any of my footage, even at higher speeds. GoPro has achieved this result by mounting to mic’s, one in front and one in back. By sensing the wind and noise, the GoPro can decide which microphone should be used, and which shouldn’t. I haven’t been able to test the audio quality in and around audio. But I have been told it is really good in those conditions as well. We plan to test it again while windsurfing and will add our findings to the review later on.

A drawback, but also consequence of the choice for smaller dimensions is the absence of the LCD screen. There is still a tiny screen left but it walking through the menu and changing settings of the camera’s is not something that is easy to do on the camera. You will need the smartphone app to connect to the camera to be able to change settings.

Battery and freezing up

During our test the GoPro Session frooze on a number of occassions. Seeing as there is no battery, it wasnt an option to take out the battery. I managed to unfreeze the camera by connecting it to my laptop. But if it happens on the mountain or in the forest, there is no way you can really effectively unfreeze it easily. So that is a bit of a drawback.